Most importantly, candidates are to know that the newly released 2021 UTME Application statistics that was organised by JAMB is for their own good. 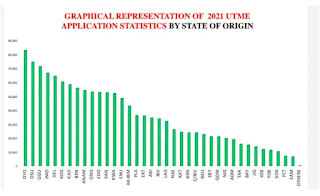 According to the stats published by JAMB, Oyo, Osun and Ogun states had the highest number of applicants that sat for this year’s UTME, one of the prerequisites for any Nigerian student seeking higher education.

The data also shows that there is no state from the northeast region among the first 15 states on the chart.

However, we hope that this article is helpful for the candidate, visit the jamb official site for more information and update https://www.jamb.gov.ng/.